The REI and its associated test models were generously donated to UBC in 2017 by the Robinson family, in memory of its inventor Charles “Chuck” Robinson. 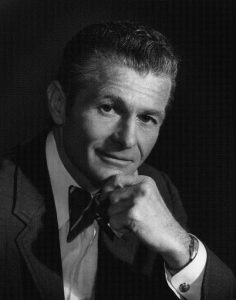 Chuck Robinson was an American entrepreneur, diplomat, and innovator whose many accomplishments include successful ventures in the mining and shipping industries, service as a board member for Nike, a 3 year tenure as the Deputy Secretary of State in the Ford administration alongside Henry Kissinger, and service as president of CBTF Co and MSHIPCO. In 1961, he also spearheaded the construction of the first Panamax, the largest vessel to navigate the Panama Canal.

As a part time resident of Venice, Chuck shared the concern of most Venetians regarding the serious damage to canal wall foundations caused by the wave generation of passing motorboats. To resolve these problems he developed and patented, with the help of the REI platform, his acclaimed M-hull Technology. The M-hull was designed to reduce wake in hopes of alleviating the erosion of the canals of Venice, even if that meant sacrificing some of the boat’s efficiency. Surprisingly, testing with the REI revealed that by minimizing the wake, the M-hull not only increased efficiency (by reducing drag), but also produced a smoother more stable ride. Chuck co-founded MSHIPCO to collaborate in the implementation of this breakthrough technology. The pinnacle of this technology was the US Navy’s M80 Stiletto, which is still in operation as an advanced technology testing platform.

A plaque honoring Chuck and his family’s contribution to the UBC NAME program can be found in the Civil and Mechanical Engineering building at UBC.

Serco provides expertise in a wide range of public services across North America, including naval design and engineering – particularly naval architecture, marine engineering, structural engineering and comprehensive lifecycle support. In August 2019, Serco acquired Alion Science and Technology Corporation’s Naval Systems Business Unit, which generously provided start-up funding to the UBC NAME program to cover the costs associated with preparing the REI platform for use as an educational and research tool.